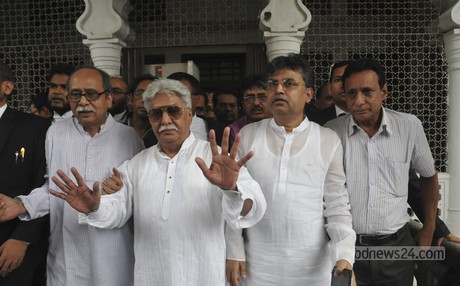 The Supreme Court has found two editors of Bengali daily Janakantha guilty of contempt of court.

Editor Atikullah Khan Masud and Executive Editor Swadesh Roy have been ordered not to leave the courtroom until the appeals bench, which heard the matter, adjourns on Thursday.

It has ordered to donate the money to a charitable organisation and submit the receipt to the court.

Janakanthna Editor Atikullah Khan Masud and Executive Editor Swadesh Roy sat on the bench meant for lawyers when the court started to read out the verdict around 10am on Thursday.

They were seated when the judge finished reading the verdict, which found them guilty for contempt of court and ordered them not to leave the court until the bench adjourns for the day.

On Thursday, the chief justice-led bench heard a total of 54 matters and the court adjourned at 1:15pm. The journalists remained in the courtroom the whole time.

“The court said in its observation that the slandering of the judiciary and the judges cannot be tolerated. Free speech does not mean it would be unbridled,” the attorney general told reporters after the verdict.

On Jul 29, after the apex court gave the final war crimes verdict in Salauddin Quader Chowdhury’s case upholding death, the Supreme Court issued a contempt rule over an article published in Daily Janakantha questioning conduct of judges in the case.

In his article Roy wrote: “Salauddin Quader Chowhudry is a heinous killer of 1971. He is among those traitors who bathed most in the blood of innocent Bengalis. His appeal verdict is on Jul 29. Father Mujib! Here, too, your daughter is being made to stand with her back to a crucifix.

“If that is not true, then how did Salauddin Quader Chowdhury’s family have a meeting with those who were judging his case? How did they manage to get to the judges? Was it ISI or ULFA? Do judges ever meet the families of the victims? Is it part of their ethics?

“Why is Sheikh Hasina’s government busy now trying to stop some judges from going on foreign visits to attend programmes by organisations affiliated with the BNP and Jamaat?” read the article.

During the hearings, Janakantha’s lawyer petitioned to the court to form a new bench, without the chief justice, to hear the matter.

The court scrapped the plea but said that a larger bench would hear the matter.

In a verbal order, the court had also asked the attorney general to verify whether there is any substance in the claim about the chief justice being barred from going abroad by the Prime Minister’s Office.

The state’s chief legal officer had then told the court that it was not true.

On Sunday, while the court was hearing the matter, the chief justice said the law empowers him to decide entirely on his own whether or not to go abroad.

Even Supreme Court judges going abroad will have to be cleared by him.

“After taking over as the chief justice, I discussed with some of my predecessors, took their advice on how to carry out my responsibilities.

“I had a number of meetings with Prime Minister Sheikh Hasina. She never comments on the judiciary and does not interfere in judicial matters.”

On Monday, Janakantha’s counsel Salahuddin Dolon produced a transcript of a telephone conversation between the Chief Justice and someone else, which the defence claimed was a discussion on war crimes convict Chowdhury’s appeal and a case on BNP leader Moudud Ahmad’s house.

The chief justice said the transcript was about a discussion he had with another judge and accused the ‘Janakantha’ editors for trying to ‘mislead the court’ even after a rule has been issued against them for a ‘defamatory’ article.

The same day Ekattor TV ran a news report, in which the conversation was aired.

Later, participants in its talk show ‘Ekattor Journal’ discussed the audio tape of the conversation.

The next day, in a suo moto rule, the Supreme Court ordered submission of the video footage of the talk show and news report by Aug 16.

In March 2014, the Supreme Court had punished Bengali daily Prothom Alo’s Joint Editor Mijanur Rahman Khan after finding him guilty of contempt for an article he wrote.

Prothom Alo editor Matiur Rahman was acquitted as he had issued an unconditional apology.

The apex court had then warned Prothom Alo and all other media against publishing articles on the judiciary.

Full text of the Order: http://icsforum.org/library/archives/1694


Uploaded By : Rayhan Rashid
This item has been recorded here as part of ICSF's Media Archive Project which is a crowd sourced initiative run by volunteers, a not for profit undertaking to facilitate education and research. The objective of this project is to archive media items generated by different media outlets from around the world - specifically on 1971, and the justice process at the International Crimes Tribunal of Bangladesh. This archive also records items that contain information on commission, investigation and prosecution of international crimes around the world generally. Individuals or parties interested to use content recorded in this archive for purposes that may involve commercial gain or profit are strongly advised to directly contact the platform or institution where the content is originally sourced.