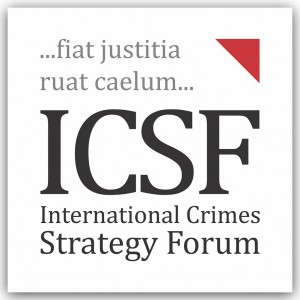 International Crimes Strategy Forum (ICSF) is an independent global network of experts, justice advocates and organisations committed to end impunity for international crimes, ensure justice for the victims of these crimes, and uphold rule of law and human rights. The activities of ICSF are focussed on justice for international crimes, such as, genocide, crimes against humanity, war crimes, and terrorism – through documentation, campaign, advocacy, research and education.

Background of ICSF: the Beginning

In February 2009, ICSF was launched, initially bearing the name War Crimes Strategy Forum (WCSF), which was subsequently changed to International Crimes Strategy Forum (ICSF) after a few months of operation. The very inception of ICSF was in acknowledgment of the enormity and complexity of tasks involving prosecution of the perpetrators of international crimes in Bangladesh after a lapse of 39 years since the atrocities were originally committed, and was also with a commitment to support the justice process at Bangladesh’s International Crimes Tribunal.

ICSF’s areas of interest and operation have evolved, extending beyond the justice process of Bangladesh. ICSF endeavours to stand by the victims of international crimes anywhere in the world. ICSF pledges to act within its capacity wherever their voice and creed for justice tend to get suppressed amid equations of global political power-play, lobbying and PR activities led by alleged perpetrators, and strategic inactions of other international civil society actors.

Human Rights. Justice. Rule of law. Rooted in non-elite, non-exclusive, collective and participatory premises, the attitudes (as well as qualities) that we seek to promote within and outside the coalition are: excellence, dedication, boldness and perfection. All forms of elitist and/or self-propagating tendencies are, therefore, resisted. We believe, these values are essential to an organisation comprised of justice advocates.

Official Logo is as on top of this page.

Volunteers and partners in the coalition

Since its beginning in early February 2009, the Forum has come a considerable way. It had always been comprised of and run by volunteers who are committed to justice and fairness acting in collaboration to pursue the Forum’s objectives. Our volunteer-base is now spread all over the world and the network is expanding. We have amongst us – students, teachers, policy makers, human rights and cultural activists, professionals such as lawyers, engineers, doctors, researchers, journalists and other media personnel, members in the armed forces, individuals who have fought in the liberation war, and most importantly, individuals who have suffered directly as a result of international crimes. With every passing day, more and more people and organisations are extending their hands to volunteer and develop our various projects. At present, in addition to volunteers contributing independently, the following organisational entities are also working together as partners in this Coalition (listed alphabetically):

Apart from the website, ICSF also runs a number of official social-network outlets, which are: