Take a look at the following screenshot of Jamaat’s website: 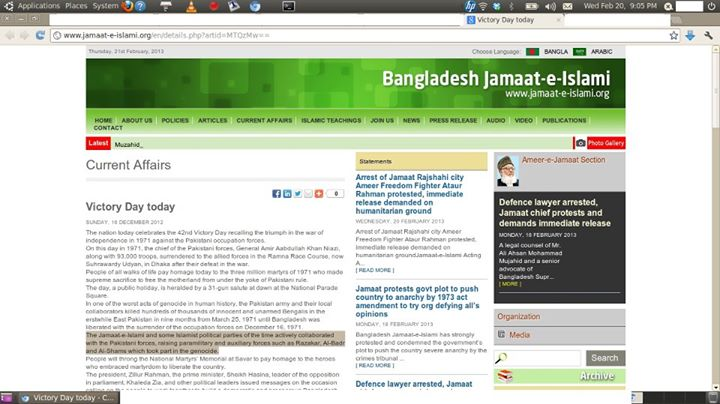 Regarding the genocide in 1971, the victims, and the role of principal perpetrator Pakistani armed forces – the entry in the website reads:

“In one of the worst acts of genocide in human history, the Pakistan army and their local collaborators killed hundreds of thousands of innocent and unarmed Bengalis in the erstwhile East Pakistan in nine months from March 26, 1971 until Bangladesh was liberated with the surrender of the occupation forces on December 16, 1971.”

Regarding the then Jamaat-e-Islami’s role in the genocide, the article in the website clearly admits:

“The Jamaat-e-Islami and some Islamist political parties of the time actively collaborated with the Pakistani forces, raising paramilitary and auxiliary forces such as Rakakar, Al-Badr and Al-Shams which took part in the genocide.”

Seeing is believing, and truth sometimes does come out in strange ways!

You can see the date of publication at the top right corner. And the screenshot was taken immediately after the content in the website was first published. It was, however, no surprise that the entry caught attention of many and eventually went viral.

Within 24 hours it reached the owner of the website so they erased that information immediately. But the story didn’t end there, as yet a new twist in the plot was waiting.

As suspected, the website admin, presumably under the instruction of Jamaat-e-Islami, took immediate measures to control the damage by amending the entry. But that also left a trail as the website was already under watch at changedetection.com, a tool that monitors changes in published web content.

As expected, the following alert (see screenshot below) was received when the administrators of Jamaat’s official website attempted to amend the entry on the website regarding Jamaat’s collaboration in genocide in 1971. 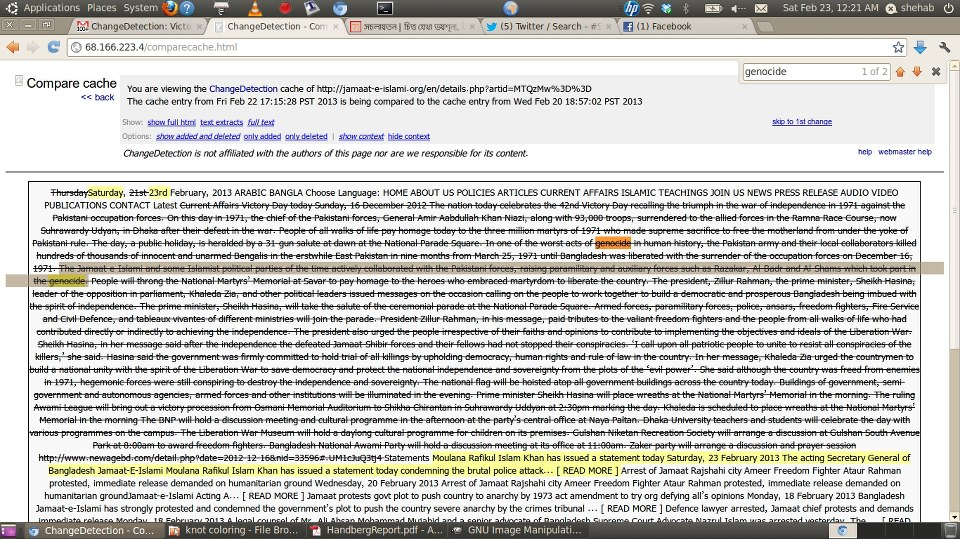 Lying is bad but getting caught over that in an attempt to hide one’s well documented historical misdeeds is even worse. But again, those who know the nature of Jamaat-e-Islami and the way this outfit operates, also know that this organisation is no stranger to lies and subversion.

In that respect at least, Jamaat-e-Islami seems consistent, even after four decades.

Disclaimer: The views and opinions expressed in this article or in the comment section are those of the respective authors and do not necessarily reflect the official policy or position of International Crimes Strategy Forum (ICSF).